Much has been said and wrote about lately regarding sleep; how it affects our health and weight.  In a recent study published in Journal of the Academy of Nutrition and Dietetics in November 2012, researchers looked at previous research and determined that even a slight loss of sleep led to health consequences, including weight gain.

As Dr. Lori Shemek has pointed in her book, Fire-Up Your Fat Burn! both ghrelin and leptin has a big affect on how we eat. Sleep is important as a lack of it reduces the output of leptin and increases ghrelin. Leptin helps to tell us that we’ve had enough to eat and that freaking ghrelin leads to crave more food, especially the processed carbs.

The study also brought out that those that had more waking time (less sleep) also had less physical activity. A tired person just doesn’t have the drive to engage in exercising versus someone who was well-rested. Less sleep led to increased stress and increased cortisol (stress hormone). This become a vicious cycle because stress also leads to less sleep. So does obesity. All of which leads to a myriad of health problems, including heart disease and diabetes. 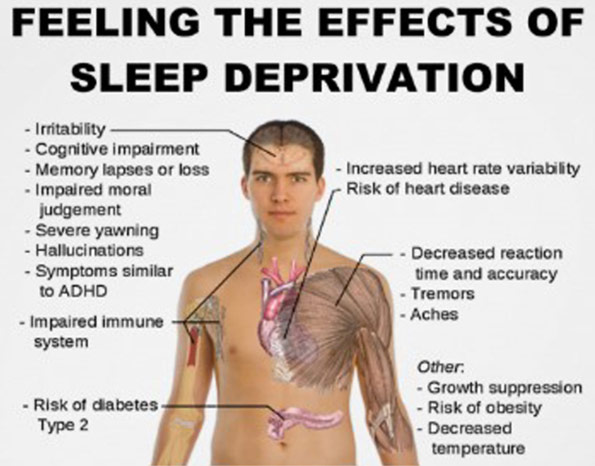 I still remember years ago my kid brother said he was doing good with less than 5 hours of sleep per night. He was in his early 30’s back then. In the year 2000 at the age of 39, he suffered from his first heart attack. A lack of sleep combined with other unhealthy lifestyle factors helped to create this consequence. Which he did not learn his lesson that time and had another heart attack 10 years later.

Here are some suggestions that may help you to get a better night’s sleep:

I hope you have learned some stuff regarding the importance of sleep and what you can do about it. Focus on 7+ hours of sleep per night. If you think you may suffer from sleep apnea, see a doctor. I wish you a restful, deep sleep every night. And wake up fully refreshed. Hey, and you may just start burning fat faster too!